Will Work for Food: How Boston is Building a Just Food Economy

Originally published on the personal blog of Penn Loh, UEP Lecturer and Director of Community Practice.

Despite growing appetites for healthy, sustainable, and local food, workers in the food industry are still among the lowest paid and highly exploited workers in the US. The more than 20 million people (representing 1/6 of the entire US workforce)[i] who are growing, producing, and serving food often work long hours in hazardous conditions for poverty wages, with few opportunities for economic mobility.

Many are, not so ironically, food insecure themselves. A 2014 study of almost 300 restaurant workers in New York City and San Francisco Bay Area found that almost one-third were food insecure as defined by the US Department of Agriculture.[ii] These rates are double the overall rates in those cities. In the Bay Area, workers serving organic or sustainable food were 22% more likely to be food insecure than other food workers in the region. A 2012 study analyzing US Census and Bureau of Labor Statistics data found that a majority of food sector workers qualified for government assistance programs and 14% relied on food stamps.[iii]

In Boston, the story is much the same. A 2016 study of 500 Boston area restaurant workers by Restaurant Opportunities Center found that 36% earned below the US Department of Labor’s lower living standard for a family of three.[iv] And 94% said their employer does not provide health insurance, while 83% reported not having access to paid sick days.

“The hardest part about my previous job as a waitress was the inconsistent hours, lack of benefits, and low pay when it was a slow day with few tips,” says Dinora Andrade, who is now a prep cook at Boston’s CommonWealth Kitchen incubator. 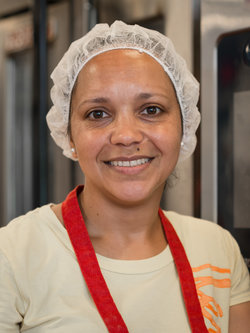 Yet, the local food economy is booming, with new restaurants and food businesses catering to foodies. In 2014, local foods generated $12 billion in sales, accounting for 2% of total U.S. retail sales of foods and beverages, and it is predicted that local food sales will grow to $20 billion in 2019.[v] In Boston, food service jobs have grown from 6.5% of all private sector jobs in 2004 to 8.5% in 2014.

In Boston, a variety of efforts are under way to ensure that this growth benefits all workers and does not just lead to more low-wage jobs. Some have been campaigning to raise the wage floor. UNITE HERE (Local 26) has unionized hundreds of university food service workers to win higher wages and more job security. In Massachusetts, the Fight for 15, initially launched by fast food workers, recently won a minimum wage increase to $15 an hour by 2023.

But the fight does not end with higher wages. Efforts are also under way to support food entrepreneurship and business ownership by those who have been most exploited. Restaurant Opportunities Centers United, which has a Boston chapter and fights for fair wages, has developed restaurants cooperatively owned by workers in New York City and Detroit. Commonwealth Kitchen in Boston is incubating food businesses started by local entrepreneurs, primarily women and people of color. And it is creating a food manufacturing workforce to support these new businesses, as well as create a supply chain of locally manufactured goods to local universities and hospitals. Many of these new food businesses and their entrepreneurs aspire to generate benefits for workers, community, and the environment, as well as make a profit.

All of these efforts are needed to transform the conventional food economy, which exploits people and the planet to mass produce inexpensive food. The global industrial model starts with government subsidies and cheap labor to promote the ecologically harmful production of inexpensive commodities like corn and sugar. These commodities are then manufactured into food products, often unhealthy, which are then shipped around the world.

Even nutritious fresh foods are a part of this global system. Lettuce, for instance, is harvested by migrant workers, who are not protected by federal labor laws and often vulnerable to other abuses, as a quarter to half of all farm workers in the U.S. are undocumented.[vi] That lettuce then gets trucked across the country by large distributors to grocery stores, cafeterias, and restaurants. Though the workers at the retail end of the supply chain may not have to work in as hot or pesticide-laden conditions as farmworkers, their work is also low paid and often seasonal and without any benefits.

To break this cycle of producing cheap food by paying poverty wages and poisoning the environment, food justice movements are working to set higher labor and environmental standards, as well as re-localize the economy with “high road” businesses. Food worker organizing has resulted in major gains and a fairer share of the fruits of the food economy.

Over the past several years UNITE HERE has unionized thousands of food service workers at Boston-area universities. The 700 workers at Harvard went on 3-week strike in Fall 2016 to win wage increases to $35,000 per year and more affordable health care. In Fall 2017, over 300 Northeastern University workers won $35,000, up from an average of less than $22,000.

While trying to reform the conventional food economy, the food justice movement is also building new business models for more locally grown and manufactured food. ROC United seeks to organize restaurant workers to advocate for fair wages, but at the same time is opening COLORS restaurants that are owned by workers and modeling “high road” ethical labor and environmental practices, such as providing free skills training to workers to help them obtain living wage jobs. COLORS have opened in New York City and Detroit and are planned for Washington DC, New Orleans, and Oakland. ROC is also engaging consumers through Diners United to promote dining at high road restaurants by reporting restaurants with low-road employment practices, such as sexual harassment and discrimination, to ROC.

No single farmer, food manufacturer, or restaurant is going to transform the food economy by itself. However, linking these businesses together into supply chains and building a base of ethical consumers to drive demand, can be the foundation of a more just, sustainable, and democratic economy and challenge the conventional food system. There are several notable examples of high road food businesses in Boston area that are pioneering food justice practices.

City Fresh Foods prepares healthy, culturally appropriate meals for many institutions. Founded by several entrepreneurs of color in 1994, the company has now grown to ~100 employees. Because its mission was always about providing economic empowerment to local residents, it is working towards 100% community ownership. It already practices open book management and profit sharing and is majority owned and operated by local residents. City Fresh leaders also helped found Urban Farming Institute to train local residents to grow commercially on vacant lots.

As more and more local residents are inspired to start food businesses, infrastructure is growing to meet the needs of these new entrepreneurs and their small businesses. Based in Boston’s Dorchester neighborhood, CommonWealth Kitchen (CWK) incubates over 50 small food businesses, a majority of which are owned by women and people of color. From food trucks and caterers to ice cream and empanada producers, these businesses collectively employ more than 140.

As startup businesses, most CWK members do not yet have the revenue or size to support many full time, year-round jobs. Some businesses only need workers during high production seasons, such as in the summer for farmers’ market production or during the holidays for gift order production. They find it difficult to hire workers with the skills and motivation, when they can only offer part-time seasonal contracts.

CWK is helping to solve this labor challenge by training its own workforce to prepare food under contract in its commissary kitchen, to serve its multiple members. This system of sharing workers helps to aggregate many small jobs into full-time jobs. CWK now has a commissary workforce of 11, being paid $12-16 per hour, with support for training and career advancement. They prioritize hiring from the local neighborhood, with 90% of commissary workers living in surrounding neighborhoods.

Dinora Andrade used to work as a waitress at a local restaurant, where her hours were inconsistent and part-time. She was hired as a CWK prep cook in the commissary kitchen in 2014, and says that she enjoys this job more than her previous one. “It is a good working environment, with a friendly community and benefits. And it is close to where I live so I can just walk,” says Andrade. Her job in the commissary kitchen is usually full-time, between 30-40 hours a week. When she wants to work more hours, Andrade picks up extra work to help prepare for food trucks or other caterers in the CWK member business family.

With space, equipment, and workforce, CWK is now also pioneering small-scale contract manufacturing for partners beyond its own members. Industrial food manufacturing in the conventional food system typically requires large orders with frequently scheduled production runs. While the exact order amount varies depending on the product and equipment, in many cases the businesses are required to increase their production by 100-200%. CWK saw an opportunity to fill this gap in the food system to serve smaller local businesses, as well as to spur the creation of more quality jobs for food workers.

To put this manufacturing capacity to use, CWK has been developing products for universities and hospitals that are looking to source more local food. In one example, they are using surplus end-of-season tomatoes from local farms to make tomato sauce for local universities. In 2016, CWK produced about 15,000 gallons of crushed tomatoes from local tomatoes gleaned by Boston Area Gleaners for Northeastern University to use in their on-campus meals. They are also trying innovative ways to process other locally-grown produce, such as apples and pumpkins, into products with longer shelf-lives such as apple sauce and as an input for local beer.

As these efforts in Boston show, turning bad jobs in the food sector into good ones requires more than just raising wages or building local food businesses. It will take an ecosystem approach, in which local supply chains can be built around local growers, producers, and manufacturers, and connected to consumers who care about where their food comes from and how the workers and environment are treated in getting it to their plates.

[i] Food Chain Workers Alliance (FCWA). June 6, 2012. The Hands that Feed Us: Challenges and Opportunities for Workers Along the Food Chain. Accessed July 11, 2018 from http://foodchainworkers.org/wp-content/uploads/2012/06/Hands-That-Feed-Us-Report.pdf